Or: Of the Big-Name Papers, Only The New York Times Knows How to Write a Lede

It’s a mark of how far I’ve strayed from my first (professional) love, that I didn’t know the Pulitzers were being announced today until the New York Times breaking news notification came across my phone. A few years ago, sitting in a newsroom, my colleagues and I were making (mostly correct) predictions about who would win what.*

It’s a mark of how my love for  journalism–and for people I did it with–has shaped me, that I got up almost immediately to call another journalist friend to discuss. She too no longer works in journalism.

But even more notable as a sign of the changes that have come were the prizes themselves, and the message the New York Times‘ lede appropriately conveyed:

The Post and Courier of Charleston, S.C., with a staff of about 80 and a daily circulation of 85,000, won the most prestigious of the Pulitzer Prizes for journalism awarded on Monday, for a series on the high number of deaths resulting from domestic abuse in the state.

Pulitzer coverage is a funny thing: Would these prizes be news worthy of breaking news alerts,  prime web-page real estate, and multiple articles if they weren’t news stories about the newspapers? Do the papers even find the right stories within the prize announcements?

Screenshot from the Wall Street Journal’s coverage of the Pulitzers

The Wall Street Journal‘s home page headline is “Wall Street Journal Wins Investigative Pulitzer Prize” and doesn’t mention the Post and Courier in the subhead or the first two grafs.  Reuters–which does not have its own prize to highlight--led with the New York Times‘ win, even though the Public Service award is the most prestigious.

I can almost forgive all this eye-roll-inducing self-congratulation because the print news industry has so little to celebrate these days.

But there IS news in this year’s awards:  that a newspaper so tiny could win an award so big ( a paper that size has not won in five years, and the Post-Courrier has not won since 1925); that public service was defined as reporting on  domestic violence, a topic notoriously under-discussed;  that  a newspaper did  work which was data driven and focused on taking previous years’ reporting to the next level despite a staff of 80.

By the time I got to the Post Courier page, the only coverage on the home page was an editorial urging legislative action for restrictions on gun ownership by domestic abusers.

That Times’ lede is a lede written by a journalist for journalists. For people who can read that sentence and understand all  the implied history of heartbreaking layoffs and fear about the Buzzfeed-ification of journalism. For people who know what it’s like to pray that data analysis will be the panacea of journalism as a whole while also hoping that crunching the numbers will lead to a compelling story about the humans journalists truly want to serve.

This year’s prizes offer a second, related story about the state of journalism today. The Daily Breeze won the prize for local reporting  “for their inquiry into widespread corruption in a small, cash-strapped school district, including impressive use of the paper’s website.” The paper has seven local reporters.* One of the journalists who won the prize has already left to become a publicist “for economic reasons.” The reality of the business, especially for local journalists, is so brutal that even a shiny prize can’t hide it. 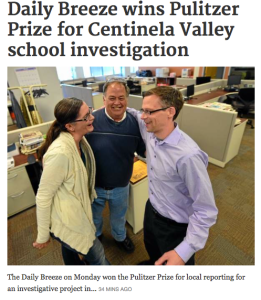 But  to the small papers everywhere–including the college papers such as my very own–that a small, over-worked staff can still produce great journalism, and perhaps has an obligation to do so (my heart broke a little when I noticed that on a non-print day Spec had fewer news articles than we did on the days we were most ashamed of the product we put out. I get it, but it’s sad).

The message “do more with less” is cynical and short-cited when it comes from the business side, but it sounds more like a defense of the value of what journalists do when it comes from the Pulitzer committee  and is highlighted by THE newspaper of record and its peers. The Wall Street Journal, Reuters and company should have had the heart to recognize that the Pulitzer Prizes are about more than the big names. They are about the potential journalism still holds, staff and circulation numbers be damned.

END_OF_DOCUMENT_TOKEN_TO_BE_REPLACED

My own short journalism career was largely unimpeded by my gender (the one big gender fight in my college newsroom ended in conversations and e-mails that  could have been a PBS special on forgiveness and understanding), but I still saw it and heard it. The fellow journalism interns who thought nothing about talking about visiting strip clubs while I was standing right next to them, the female reporter who struggled to get cops to take her seriously when she covered a crime scene, the staff photographer at my school paper who was asked not to take the photos on a story I was writing because the editor didn’t think two women should go to a low-security prison, the writer (me!) who didn’t object to that reasoning despite no indication from our sources that the precaution was necessary.

There were messages I was young enough to ignore that said that to rise to the top was to choose journalism over family. There were congressmen who didn’t take me seriously. There was a Senate press corps that was still predominately male to say nothing of the gender imbalance  in financial-related press conferences.

I knew that I was already benefiting from fights of The Girls in the Balcony  by virtue of entering journalism when I did, and, with her appointment as executive editor of The New York Times, Jill Abramson (who also benefitted from those fights) seemed to bust open the glass ceiling long before I was close to hitting it. It seemed that the industry I loved would be a little more likely to love me back. (It turned out, it didn’t, or I didn’t love it as much as I thought I did, but that was not related to my gender).

Abramson, during the announcement of her appointment to executive editor.

The night Jill Abramson was announced as the next executive editor of The New York Times  I couldn’t sleep. Three years later, she was fired. We don’t know the whole story as to why she was fired, but there is reason to be skeptical of claims that is was simply management style, mainly that the Times has had lots and lots of bad managers at the helm. From The New Yorker:

Another, a prominent reporter, proposed a multiple-choice question: “Tough and abrasive?” (a) Abe Rosenthal (1977-86), (b) Howell Raines (2001-03), (c) Max Frankel (1986-94), (d) Jill Abramson (2011-14), (e) all of the above. “Business is basically good, and the journalism is good, but the culture is bad,” the reporter continued. “But that describes a hundred and fifty years of the paper’s history. It’s always been sociopaths and lunatics running the place. Why step to Jill? People are genuinely upset about that.”

While Sulzberger said that he spoke to female “rising stars” at the Times who didn’t want “special treatment” and didn’t see the firing of Abramson as anything but a decision about an individual, David Carr “heard from several talented young women who are a big part of The New York Times’s future. “’ I really don’t see a path for me here,’  said one. ‘Are we O.K.?’

“Well, that depends on how the next few weeks go and whether The Times can convince female employees that it is a fair place to work, with ample opportunity to advance,” Carr wrote.

Carr concluded that Sulzberger’s assessment of Abramson’s management failings was correct, but the fact is that the way that the firing was handled at the Times scared some of the women who worked there, made them doubt that there were cracks in the glass ceiling. The coverage of the firing, both the carefully reported and the sensational, didn’t help. I read that coverage and couldn’t remember any of that thrill I had three years ago.

Sulzberger owns a newspaper–THE newspaper. He and his staff should understand messaging and the ways that messages can be unintentionally transmitted or mistranslated. Regardless of what really happened in the lead-up to Abramson’s firing, it’s inexcusable that Sulzberger  didn’t understand that female journalists everywhere were going to see Abramson’s sudden and unceremonious dismissal as a message about the metaphorical glass ceilings in the Times’ window-filled building and therefore in the industry as a whole. Sulzberger–perhaps inadvertantly–sent a message about the way a female reporter and editor is expected to conduct herself and the dangers she’ll face is she dares to be, like many of her predecessors,  pushy and forceful.  And it doesn’t look like progress.