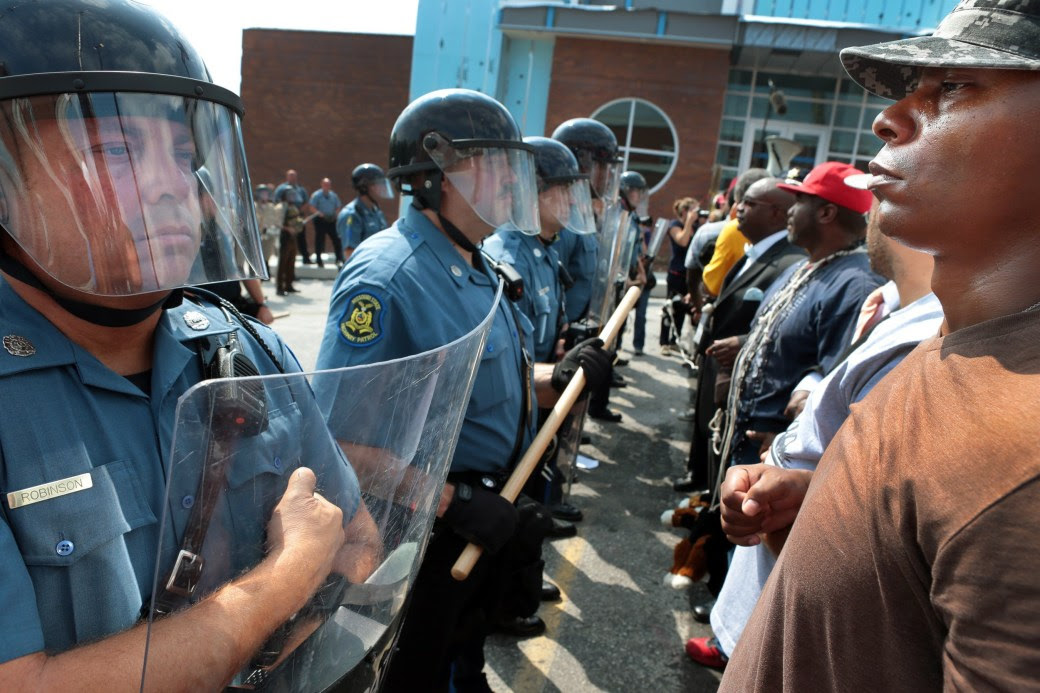 This is 2014. Photo: Associated Press

On the one hand, this should be the shortest post ever: “Because I am human and American,  I care about human rights, our constitution, racism, and poverty.” Done. Hit publish and walk away.

On the other hand, a lot of people who look like me, live near me, and have similar backgrounds to me, don’t see it that way.

The last time I found myself completely unable to stop reading a news story, was when it felt really really personal. When I finally gave myself a news break, I felt relief and calm. This time, I turned off my computer on Friday evening and didn’t turn it back on until Sunday night. When I did, I felt guilty, because Ferguson is not just about Michael Brown, it’s not just about protesters or journalists who are being stopped from doing their job. It’s not just about Ferguson. It’s about the black kid who gets pulled over by the cops ten times a month. It’s about schools with just over 50 percent graduation rates. It’s about segregation in the year 2014. It’s about the criminal justice system in this country. It’s about black boys who are taught to never call the cops. It’s about systemic racism. (Don’t believe me? Take a look at the Twitter hashtag #IfTheyGunnedMeDown. Read this. And this. And this.  And this).

And, because I’m white, I can turn off the news and I have the option to tune all of that out. I don’t live with that systemic racism, so when I turn off the news, I have the privilege of tuning it out. My friends, co-workers, fellow citizens, are not so lucky.

When I think about why this is the news story that I can’t stop reading about, I think about the West Wing‘s Toby Ziegler reaction to the shooting in Rosslyn:

Toby: Why does it feel like this? I’ve seen shootings before.

President Bartlet: It wasn’t a shooting, Toby, it was a lynching. They tried to lynch Charlie right in front of our eyes.

To head it off at the pass: yes. I know that the West Wing is not real. I know that in that fictional world, Charlie was shot at by white supremacists and that in the real world, it’s likely that Darren Wilson’s motives were not overtly racist.

Wilson may have shot in fear, but that fear probably has roots in the way our society portrays black men: as dangerous and disposable. Michael Brown’s death may not have been a lynching, but it drove to the surface a lot of anger about a lot of racial injustices. It exposes my country’s darker side, the demons that we have not conquered, the demons we haven’t even really tried to fight because it’s more comfortable to ignore them.

Yes: “We.” This should be a problem for everyone.

Last week, a commenter on Jezebel said  something along the lines of, “I wish we didn’t make this about race, so that everyone could be outraged.” But, you don’t have to be the victim to be outraged. Exercise empathy muscles. Be outraged because it’s unacceptable not because it could happen to you. Educate yourself. Learn that most protesters are not looters. Check your language. Are you making gross generalizations? Are you saying, “not to be racist” or “no offense, but…”? Ask yourself, how can I change myself and how can I change the system, no matter how small an impact. (Does anyone have an answer to the latter question? Let me know!)

In response to a piece from The Forward   “Why Jews Should Care About Ferguson”, someone on Facebook wrote.

“Would you be scared to open your shop there past 9pm? Now? Exactly, so cut it. You have no stake in the game. But those with shops over there do. So how can you belittle their concern for safety?”

Nobody in the thread or in the article had justified the looting. The idea that we somehow shouldn’t or are not allowed to care about the broad underlying injustice because we don’t know what it’s like to be store owners in Ferguson is even more mind-boggling than the idea that you should only be outraged if you are black. I have a stake in this game. We all should.

I am outraged because as a Jew I believe that I cannot ignore the oppression of others just because things have gotten easier for my people and my family over the decades. We are asked to always remember that we were once slaves and to treat others accordingly.

I am outraged because I remember how uncomfortable it was to be told before a school field trip that any misbehavior in the museum would reflect badly on all Jews everywhere, and the way that information about Michael Brown has been handled by the police, by some parts of the media, and by the Internet reminds me that black boys and men carry a burden that is similar but many times heavier. (I don’t want to link to it, but google Michael Brown Marijuana and then think back to high school).

I am outraged because as a (former) journalist, I believe that the rights of freedom of press, freedom of speech, freedom of assembly, and redress of grievances should not be corralled and must be protected even, and especially, when protecting them calls into question structures of power, and the status quo. Even when its scary or difficult. I agree with the police who believe it is part of their job to protect these rights not with the police who believe it is their job  defend against them. I am outraged because I love this country and part of that love comes from being able to criticize its failings

I am outraged  because I agree with  former Madison, Wisconsin Police Chief David Couper, who wrote, “In a democracy, police have a very complex role compared to what is expected of the police in other systems. The power of the state must be balanced with the rights of an individual; other systems have no balance requirement—only to use the power given them by the state. Uniquely, police in a democracy don’t exist solely to maintain order on behalf of the state, but also to assure that the fundamental rights guaranteed to every citizen are protected in the process.”

I am outraged because as a white person, I automatically benefit from systems, perceptions, and stereotypes that hurt others and I’m not OK with that.

I am outraged because as an American I want to live in a country that lives up to the values enshrined in the constitution.

I am outraged because I believe that everyone’s life is enriched when everyone has opportunities that allow them to reach their full potential. I believe that the American Dream should not be reserved for those who do not have to overcome poverty, sub-par public services, or bigotry.

I am outraged because as a human I believe that skin color should not serve as a barrier for entry, that the poor should not be treated as less-than, that failing students should not be dismissed as net-losses.

I am outraged because as a human I understand that teenage deaths are tragedies, whatever the cause.

I am outraged because as a person, I believe that we could be doing better, and not trying makes me furious.

I am outraged because racism even in its most subtle forms should be considered outrageous. Full stop.

A version of a Serotonin necklace from Amazon. Maybe it needs to come with a tag that says “ask me about this”

Something about the coverage of Robin Williams’ death struck a chord with me. Maybe it was my horror in hearing that details of how he killed himself were published in the LA Times. (I didn’t read the article, but I’ll say here what I said to the person who mentioned this to me: why is that news? And, in England there are actually restrictions on publishing the hows of suicides in attempt to prevent copy cat suicides. I do not support restrictions of the press but I do support reasonable and rational self-restraint and the asking of “is this news”). Maybe because he was a childhood icon. But probably it was because of the shock from people who couldn’t imagine how a man so beloved, so successful, so funny could kill himself.

Slate has done an excellent job addressing this head on with a few writers successfully mentioning their own struggles with depression without making the stories about them, explaining for what must feel like the millionth time that depression is a disease, and that people who suffer from it can’t just be told they are loved or should be happy. Some of the articles also point out that some of what the public loved about Williams could also have been Williams trying so hard to fight for his health.

I remember that. The fighting with myself. Something I have never said on the Internet for fear of the stigma: I had depression the fall after college graduation.
Thankfully, I was never suicidal. Thankfully, I got help that worked for me and my serotonin has been balanced for years now. Thankfully, I had friends and family who noticed and helped me get help. I remember thinking I was doing such a good job hiding it, only to have a friend respond to my admission–because that’s what it felt like–of depression with “I know. I guessed.” The fight with myself was exhausting and ineffective, and it was prolonged by the stigma and by the idea that somehow I could just will myself better. Which was bullshit. I know  that, with treatment and support, I survived a disease that hits some people a lot harder than it hit me and that can be deadly.  And I’ve been thinking about that when listening to people talk about Robin Williams.
One bit  from Slate’s coverage has stuck with me over the last few days:

Mental illness isn’t a marketable disease. I’m sure there are many celebrities who suffer from it, but we don’t have a celebrity spokesperson. There are no ice bucket challenges for depression. Cancer survivors can proudly show off their scars, but no one wants to see ours. We don’t have a ribbon or color. Anyone want to buy a gray KitchenAid mixer for mental health research? And depression is one of the more acceptable mental illnesses to have. Imagine a 5k run for bipolar and borderline personality disorders.

This paragraph actually sent me searching not for a mental health ribbon, but for a serotonin necklace or key chain. Because, in this case, maybe ribbons aren’t enough.
Maybe the “ribbon” for depression can also be a teaching tool:
“What’s that?”
“Oh, it’s serotonin, the chemical widely understood by scientists and doctors  to be linked to depression; when people are depressed, it often is reflective of a chemical imbalance in the brain. That’s one of the reasons why depression should be considered an illness, and not something that a person can just will away if they smile enough, get enough perspective, are strong enough, or just pull themselves up. I’m a survivor. Others aren’t so lucky.”
A ribbon that is actually a molecular structure could start a conversation with the curious and push past a lot of the stigma by diving straight into the very issues that undercut the stigma. It appeals to my inner geek and my inner advocate. It certainly doesn’t launch the type of campaign Molly Pohlig  is referring to in that piece, but it could be something, a code for those in the know that there are other people out there and a way to start conversations with others.