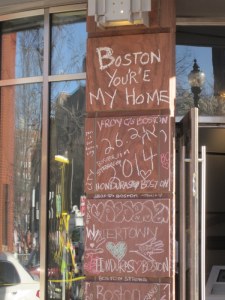 Chalk messages written on a storefront on Newbury street the week following the Boston Marathon bombings and the arrest of Tsarnaev.

The idea of human rights arose in parallel to the rise of photography; when we could see abuse happening around the world, we had more reason to get angry about it.* Photos made the tragedies seem closer to home. In the age of the Internet, it would follow, we should be able to get outraged about everything. But we don’t. Maybe there are too many things worthy of our outrage. Maybe, when we have access to information about everything we need a way to rank tragedies, to say this one is closer to me. These victims looked like me or lived near me or could have been me.

All of which is complicated by the fact that while we could have equal access to information to everything, we actually don’t. News doesn’t get all covered equally. Rich white child victims might sell more papers than black teenage victims. I feel dirty just writing that. It shouldn’t be true. But too often it is. War in an African country gets fewer viewers to tune in than a dick pic scandal in Washington D.C. Sometimes, lots of news competes for the same news cycle. (See for example: the international section in the last few weeks). Sometimes, it’s a slower news week so one story gets more attention than it would any other time.

Sometimes the news is personal; we find ways to make it so, We find that someone we know knows the mother of a kidnap victim. The planes came from our airport. For a few hours, or minutes even, we couldn’t reach our family, worried that they were hurt or that their homes were destroyed. A bomber attacks our city.

Journalists are taught to remove themselves from the story. It’s the ultimate death of the author, by choice, a surgical removal of a person who actually is part of the story.** Well-written journalism moves me as it should, but objectivity is a habit that dies hard, so I was shocked to find myself furious when I read that Dzhokhar Tsarnaev’s lawyers wanted to move his trial out of Boston and to D.C. Lawyers said Tsarnaev “could not receive a fair trial in Boston or elsewhere in the state” because a large percentage of people knew someone at the marathon, were affected by the shelter-in-place city shutdown during the manhunt, and presume that Tsarnaev is guilty.

“Woah,” I thought. Not only should I still be thinking of him as “the alleged bomber,” because that’s how newspapers refer to suspects who have not been found guilty, but I also actually do believe in the right to a fair trial for everyone, that upholding our democratic values when it’s the hardest is what makes our democracy strong. And yet, my reaction to the news was that if Tsarnaev wanted a fair trial, he shouldn’t have committed the crime. Twisted logic at its best.

Because ultimately, I didn’t sleep for a week after the bombings, reading the news non stop. Because this year on Patriot’s Day, standing at the bottom of Heartbreak Hill wearing a Boston Strong t-shirt felt like the healing I didn’t know I needed.

Because it turns out that inital rage cannot always be suppressed by journalism ethics and democratic values. That initial reactions can be tempered in the name of logic and values, but can’t be prevented altogether. That while we should rage about all tragedy, some will be closer to home than others, and that there’s a limit to how small the world can shrink. Even in the age of the Internet.

A memorial to the victims of the 2013 Boston Bombing victims, placed at the finish line of the 2014 Boston Marathon.

* I first heard this idea in Samuel Moyn’s History of Human Rights class. Any misrepresentation of this is a reflection of the fact that I took the class my sophomore year of college, not of Prof. Moyn.

**The New Yorker is laughably strange about this: “‘How would you like it if I called you a whiteskin?’ Sherry Pocknett, a Wampanoag from Mashpee, Massachusetts, asked a person who asked about the name.” It’s possible that the person who asked was not the reporter who wrote the Talk of the Town piece, but given the New Yorker’s record of awkward third person self referrals, I’d bet good money that it was Ian Frazier himself who was doing the asking.