It’s been a while since I wrote here. (The last post was actually written in August). This summer has been monumental. I graduated the Kennedy School. I got a new job in a new field. My grandmother died.

My grandmother, the woman I hope to emulate, died at age 91. My grandmother, born two years after the 19th amendment was ratified, saw the world change in ways I can only begin to imagine. At 16, she went to work to help support her family after her father was killed in an accident. At 22, she travelled from Brooklyn to Temple, Texas to marry my grandfather, who was stationed at an army base there. During WWII, she worked for the military; I know from photos that at some point she sold war bonds, but I imagine she had a wide range of jobs.  When my mother, the youngest of two, was in elementary school, my grandmother went back to school and earned her bachelor’s and master’s degrees in education. She taught reading until, as she told it, she could no longer climb the stairs at the school. Then she retired.

She loved fully and devotedly. She was , in all the good ways, the stereotype of a grandmother. She baked brownies, and showered us with gifts and kisses and love. She shepped nachas. She told me over and over again, “I just want you to be happy.” And she meant it.

For most of her 69 years of marriage, she served my grandfather dinner every day, making sure it was ready when he came home. Until she was too frail to serve. Then my grandfather served meals and became her caretaker. Even then, she wanted to help out with preparing for holiday meals, and was frustrated when she couldn’t. But she could still offer advice, and food, and love to everyone. And she did.

My Grandma Miriam was a  woman of her era and of every era she lived through. It goes without saying, but I will say it anyway: I miss her terribly.

Today, I was in the  LOFT dressing room staring at myself in the large shared mirror, trying to evaluate a suit. A woman holding her granddaughter–a tiny baby wrapped in a pink blanket–looked on. “That’s a nice suit,” she said.  Do you wear suits to work?”

“I think so. I haven’t started the job yet.”

“That’s the kind of suit that the young women wear in my office,” she said. “I’m a corporate attorney.” We talked about suit jacket options, and she congratulated me on getting a job.

“She’s beautiful,” I said, motioning to the baby. How old is she?”

On cue, her daughter came out for an opinion on a pair of jeans.

“Can  I ask you something else? Is this shirt is too low?” I asked the grandmother. It wasn’t.

“I would wear that to work, and I’m a corporate executive,” the daughter said.

I changed back into my own clothes, and congratulated the women on the baby. They congratulated me on the job. I bought the suit, shirt and all.

As far as I remember, I never went clothes shopping with my grandmother. Maybe I did, when I was a tiny baby wrapped in pink and my mother needed a new pair of pants.

The last time I visited my grandmother in her house, I came bearing a brand new dress that I planned to wear to my graduation. I modeled it for her and got her approval. She told me I looked good in it and that it wasn’t too short. “That’s how you know it really looks good,” my sister said. “Grandma would never tell you it looked good if it didn’t.” True.

As I write out today’s dressing-room conversation, it seems utterly mundane, but I think that’s why it thrilled me: the normality of the high-powered women, the way they were willing to offer fashion advice, which really was also career advice. The tiny, third-generation strong woman resting in her grandmother’s arms, still completely unaware of the blessings of the strong women that came before her. The blessings I am so lucky to have. 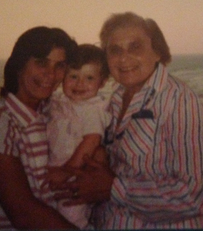 My mother, me, and my grandmother.

This is an old post that I never hit “publish” on, about the sale of the Washington Post to Jeff Bezos. In the name of actually starting to write things on this blog again, I am not going to update it to reflect Bezos’ visit to the newsroom or the Post’s coverage of today’s shooting at Navy Yard and the decision to drop the paywall for the coverage. For those people who are not journalism geeks, I apologize in advance for the references that will be confusing.

In college we talked about minutia and dreams. About em dashes and Oxford commas and deadlines. About race and gender and labor unions. About the mission of a Journalist to give the world part of what it wants to hear and part of what it ought to. About saving the industry, about rejection letters, about getting picked up in the college section of the New York Times. About newspaper politics and newspaper sex. About Woodward and Bernstein and Pulitzers and student-reporter-sized exposes.

In college, we were sentimental about newspapers without even realizing it. We were madly in love and mad.

And slowly we grew up.

Slowly. We went to work at newspapers. We stood in newsrooms as they celebrated Pulitzers, but more likely stood in newsrooms as the paper got bought and sold, as reporters got laid off. We joined unions. We read with awe about Katherine Graham and Ben Bradlee and wrote inscriptions to each other about whether we’d give a ball to edit the Washington Post. We hatched plans to save Newsweek, and then stopped reading it altogether, and then it stopped publishing. We went to grad school and foreign countries. We moved across the country and got laid off. We got health insurance and new contracts. We gaped open mouthed at the super stars who considered leaving journalism and then we started doing it ourselves, separating ourselves into the people who really loved the job and the people who loved the idea of the job. We went to law school, to jobs in social media, to jobs in government telling ourselves that the industry changed and these things weren’t so unforgivable anymore, not like they were when we graduated, when so many of us were actually going into journalism. Not like they were when everyone knew that path to the Chicago Tribune was from the Peoria Journal Star to the Chicago Sun Times to the Chicago Tribune. And then, if you moved to Washington with the Tribune (were you lucky enough to follow Obama), you could go from the Chicago Tribune to the Washington Post, and then you’d have Made It. No one can tell you how to Make It anymore but sometimes they tell us to write for free.

“Two more years of this and I am going to do something that really makes a difference, ” one of my college coeditors tells me. Five years ago that would have been blasphemy. Now, I am also leaving. Or at least taking a break.

When newspapers talk about the newspaper industry, most of the stories are left untold.